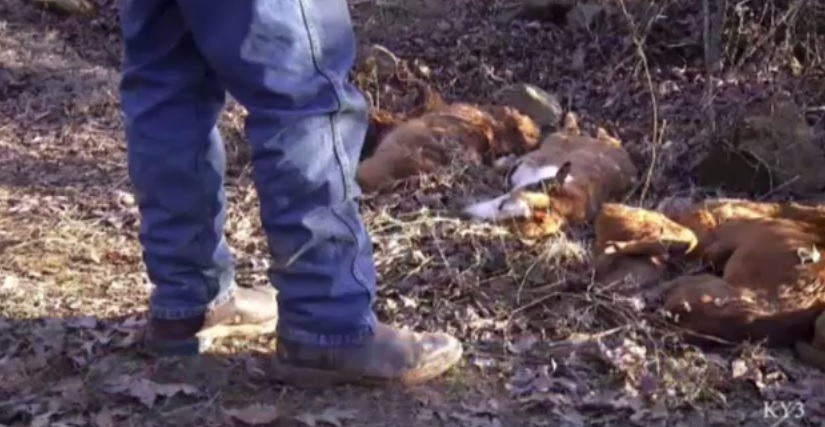 The disturbing news of dog massacre in Arkansas has not made nationwide headlines, despite standing as one of the most heinous incidents of mass killing.

KY3 is one of the news channels that aired the story of what happened in the Chimes-Trace Ridge Area south of Marshall. Nearly 60 dogs were poisoned and then shot by somebody, the dead bodies of the dogs left scattered across the woods.

The sheriff of the Searcy County was quoted as:

“This is my first in 25 years of law enforcement I’ve never seen anything like this.”

What terror the dogs suffered is hard to imagine. And one can only hope that the culprits responsible for it are soon apprehended and brought to justice. Ideally, this kind of mass shooting and killing of dogs or any animals should be treated as terrorism.

But then, since it happened to dogs, one doubts that it should be treated as an act of terror. In fact, what happens to the dogs happens to countless animals daily in slaughter houses where throats are slit or animals are stunned with hammers before being cut into pieces. And this daily terror concludes as the food on our plates – that dinner made off murdered animals.

Limiting the definition of terrorism to humans only plays with words and creates a sense of superficial seriousness. To be true to the words and intent to provide justice, terrorism should be redefined in term of the scale of massacre. What these dogs in Arkansas suffered was not less in any way than San Bernardino. Then why the large-scale media silence on the terror?