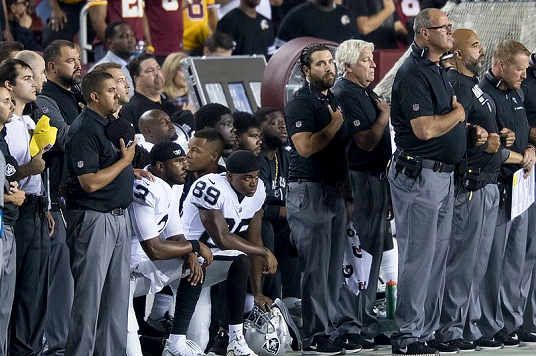 After losing the propaganda war against President Trump, the new sore leftist puppets have taken the political battle to the sports field. Many NFL players, mostly black/African-American, have made it a habit to protest the American flag and national anthem in the field by what they call “taking a knee”, that is sitting on a knee instead of standing straight and putting a hand on the heart as a gesture of respect that most observe traditionally as respect to the flag and the anthem.

Freedom of speech is what the left calls such protests and the protesting players openly take an anti-American stance saying the country oppressed them and treats them bad with discrimination.

Saudi Arabia Announces Driving Rights for Women in the Kingdom

This is big win for women’s rights and activists demanding the Saudi women the right to drive for years, and the activism world is at the moment celebrating it. An article in The Guardian however cautions that this could just be another Saudi stunt to appease the west as the kingdom still has gross anti-women laws.

The deadly vaccine mafia is at large and continuing to kill and cripple children. In the past 10 days at least two children in India fell prey to the vaccine mafia.

The first victim of the vaccine tyranny was a female infant, less than two month old, who was given multiple vaccine shots and the oral polio vaccine at a hospital in Lucknow (capital city of Uttar Pradesh state in northern India). Scroll.in wrote that the doctors weren’t ready to admit the vaccines were to blame for the infant’s death.

Just days later, a one-and-half-year-old boy fell dead in Ludhiana (Punjab) in about half an hour of being given oral polio vaccine (polio drops). The mobile polio vaccination mobs paid by government (mostly working via foreign funding) that go door to door to administer polio drops are said to have forcibly give the drops to the boy. The family says the child was asleep but the polio vaccine mob insisted on administering the drops and woke him up for that; soon after they gave him the drops, the boy collapsed, not to rise again.

The doctors, paid by the vaccine industry/medical establishment, stuck to denial in this case too arguing why other children given the drops didn’t die if it was something wrong with the vaccine.

The corrupt nexus of for-sale academicians and researchers and corporations has been exposed over and over—this time none other than the biotech giant Monsanto.

In documents released last month as part of a lawsuit against Monsanto, emails between the company and people including university academicians reveal that Monsanto faked the authorship of articles and in one case collaborated with an academician to have him write an article of choice and get it published on Forbes.com. Forbes, after the Monsanto papers were made public, then removed the blog.

The mainstream media, meanwhile has been silent on this big scandal. But of course no surprises there!