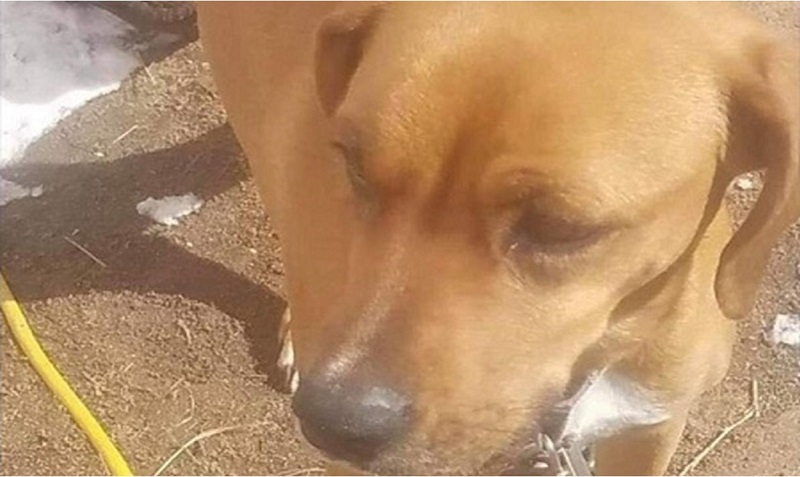 There have been multiple cases of dogs going missing in Colorado and ending up dead. Over a year ago, a dog named Bishop went missing from Elizabeth, Colorado. He was gone for seven weeks. Bishop’s dead body was found by a dumpster, apparently shot in the mouth.

Now, Randy Richers, a Peyton, Colorado resident, had his nine-month old puppy named Bear taken away; shot five times and dumped, just like what happened to Bishop. Randy’s nightmare with his dogs began in November 2019 when his dog Smokey and his other dog Roxy wandered onto a neighbor’s property and supposedly attacked two large pigs.

In a phone interview with Randy Richers and his mother Sonja Duran, they gave the chain of events starting with the two dogs, Smokey and Roxy going onto the neighbor’s property. The neighbor called the El Paso County Sheriff’s Office to respond. She also called another local resident Irene Lobaido to help with the situation.

Randy and Sonja stated when Irene arrived on the scene, she shot their dog Smokey six times and shot the two pigs, killing all three. Roxy ran off in fear and was later picked up by the Sheriff’s Office. She was taken to the Humane Society Pikes Peak Region and labeled a dangerous dog. Randy was charged with unlawful ownership of a dangerous dog.

Randy and Sonja are disputing the charges arguing when Roxy was found, she had no blood on her mouth. Randy furthered stated the pigs were large, 900-pound animals. It was not feasible to believe his dogs could kill them. The pigs had no visible bite marks on them, only bullet wounds from being shot.

There have been no prior charges of Smokey and Roxy chasing or attacking livestock. Randy’s nightmare further continued March 20, 2020 when his dog Bear, a nine-month old puppy was taken from his home. Bear was outside with Randy when a silver Dodge pickup with blue lettering on the sides drove by the house. That is when Bear vanished. Bear was not one to wander off, he always stayed close to Randy.

Randy, his mother Sonja and a group of friends and neighbors scoured the area looking for Bear. When Bear was found, he had been shot five times and his body dumped a mile from his home on I-10, not far from where Bishop’s body was found; a horrible death for a young dog that had never hurt anyone or anything.

According to the vet at Bijou Animal Hospital in Colorado Springs, there were bullet fragments in Bear’s head and jaw but no broken bones in his body. This contradicts the belief by some in the area who are trying to say Bear was hit by a car.

So now Randy has two dead dogs and one in incarceration. He wants to visit Roxy at the Humane Society of Pikes Peak Region to assure her she has not been abandoned. The staff have not allowed him to visit stating it is too hard on the dog. Currently, the cost to house Roxy at the Humane Society is $600.00 a month paid by Randy and Sonja. If they do not pay the bill monthly, Roxy will be euthanized.

For Randy’s first hearing, his case was assigned to a public defender who advised Randy to plead guilty to owning a dangerous dog, accept probation for one year and have Roxy killed. The public defender also refused to file a motion to bring Roxy home.

Randy refused those conditions. The next court hearing is in June 2020. He is currently looking to secure a lawyer other than a public defender; someone who specializes in animal law. Their goal is to get the dangerous dog charges dropped and for Roxy to be released back to them.

Per Colorado Revised Statute the first dangerous dog charge does not state death. It states an enclosure even if livestock is killed.This statute would mean that Roxy and Randy’s rights are being violated.

Another supporter of Roxy came forward in her defense; her first owner James Salazar. He wrote a heartfelt letter saying:

“Roxy is not a killer she loves everyone. She lived on a farm for 2.5 years of her life running and playing with the horses, cows, the ducks, chickens, other dogs and cats, goats, pigs, and any other animal that would come on the property.”

Supporting Randy and Sonja in their case is a strong, outspoken, social networking group currently fighting for justice for Roxy, Bear, Smokey, and Bishop and any other pets who may suffer their same fate. Tara Bostick, an animal welfare investigator and founder of the online group Colorado Liaison for Animal Welfare (CLAW) is tracking and investigating the number of dogs (mainly Pit Bulls) that are going missing and being murdered. The method is always the same in all cases.

“There seems to be an increase in dogs being found murdered. Please put a lock on your gate and watch your dogs.”

Someone is stalking and killing these dogs intentionally. There is a strong suspicion that the killer or killers is someone local associated with anti-Pit Bull hate groups such as https://www.dogsbite.org/

They are feeling justified in taking the law in their own hands by annihilating all pit bulls and other bully breeds. Vigilante justice is never acceptable in a civilized society, no matter what the feeling or belief is. If it continues, our nation will regress back to a lawless, savage, throwback populace not adhering to the guidelines of law and order.

We cannot bring back Bear, Smokey, or Bishop but we can fight for Roxy and assure that no other innocent dogs are killed based on their breed alone. While awaiting the next court hearing, Randy and Sonja have a fundraiser to help defray the cost of Roxy’s incarceration.

To help with Roxy’s bills until she is released, please donate to the fundraiser

*This story was first published in Pet Rescue Report.