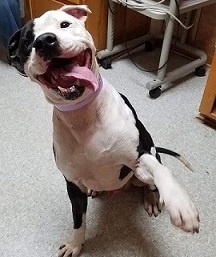 According to a recent story on a Texas news channel, the southern part of state is suffering from an overpopulation of stray dogs. One county reported an intake of 125 dogs a day.

While many dogs enter the shelter system daily, some continue to go unnoticed as they roam the streets. Most people look upon these animals as a nuisance and remain apathetic to their plight. Morgan, a black and white pit mix had been roaming the streets of Carthage, Texas for many months; maybe even a year as indicated by his paw pads being in rough shape.

But Morgan got lucky one day when Carthage City resident Fernanda Machado saw him run in front of her truck while she was driving with a friend. Fernanda knew she wanted to help this dog and left her vehicle to pursue him on foot. It took her twenty minutes to finally catch him as he would not let her get close to him. She was finally able to corner him in a carport and get a leash on him.

Upon closer inspection, she could see this poor boy had lived a horrible life. His body was a map of abuse. He was very skinny, and his face was full of cuts. Fernanda and her friend rushed the dog to a vet.  During the examination it was discovered he had missing teeth on both sides of his mouth, a split canine, most likely the result of having to eat rocks to survive. Morgan also had two lacerations on each side of his mouth. One was quite deep but healed and may have been caused intentionally or if he got stuck on some wire. He had so many infections from his many wounds, including a piece missing from one of his ears that he needed to first be treated with antibiotics for a week before he could be vaccinated.

One thought on “Rescued Stray Dog in Texas Keeps Smiling”