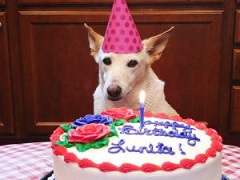 Lunita, a medium sized, disabled, female dog was abandoned on a street in Salta, Argentina in the early morning hours of May 2014. She was tied to a railing on the side of a dog grooming store. There was a note left stating her name, age, and that she didn’t belong to the person leaving her and the note. The person also stated they couldn’t keep her. There was no other information.

Lunita was lying face down on the sidewalk when she was found; her hind legs still attached to a dilapidated wheelchair. There was no food or water left with her. One of the female employees working at the dog grooming salon noticed her. The employee contacted the rescue organization, “LUBA Salta” and two of their volunteers came to get Lunita.