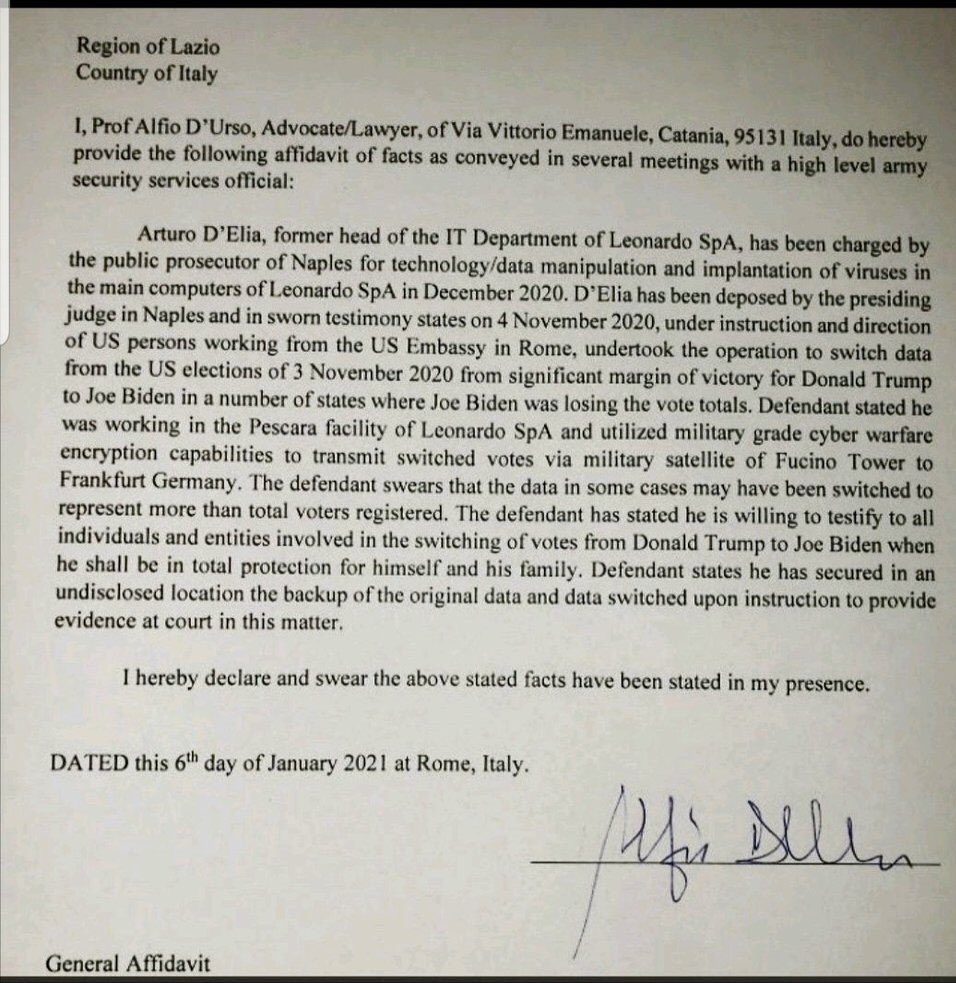 The Democrats in collusion with many Republican lawmakers and propaganda media mobs succeeded in stealing the 2020 election and certifying fraudulent elector votes, with huge help from Vice President Mike Pence, to certify Joe Biden as the next American President. As the highest court in the country turned a blind eye to the evidence of historic election fraud, a court in Italy did the opposite.

An IT Expert, Arturo D’Elia, from global defense contractor Leonardo SpA confessed via a sworn affidavit in an Italian court to committing voter fraud in the November 3rd Presidential election in favor of Joe Biden. We Love Trump reported:

Arturo D’Elia signed an affidavit admitting to switching data from the November 3 US presidential elections “from significant margin of victory from Donald Trump to Joe Biden in a number of states where Joe Biden was losing the vote totals.

The story says that he is willing to testify in court as well and says he has “all the original data backed up in an undisclosed location.”

This information is being regarded as one of the main reasons why the Democrats and their accomplices in the massive voter fraud-turned-coup against President Trump went into panic and have been asking for impeaching and immediately removing President Trump from the White House even though he has less than 2 weeks remaining in office according to the mainstream schedule of the inauguration of Biden.

Debbie Georgatos of America Can We Talk? had a video interview with Maria Zack, founder of Nations in Action, who delivered that affidavit of D’Elia to the congress on January 6th – the day the elector votes certification was held at the congress, presided by Mike Pence. Maria also told that according to her information, Italian Prime Minister Giuseppe Conte was involved in this fraud along with a certain member of the US embassy in Italy.

The video of the interview is included below.

As you would expect, the network of mainstream propaganda mobs in and outside the United States have blacked out on this story as it blows a tunnel of a hole in their denial of voter fraud to fool their audience. The affidavit, meanwhile, is being shared on alternative social media sites as popular leftist social media sites like Facebook and Twitter have cracked down on conservative profiles to stop them from sharing information that exposes the massive rigging of the 2020 election by the Democrats, complicit Republicans, and other deep state operatives.